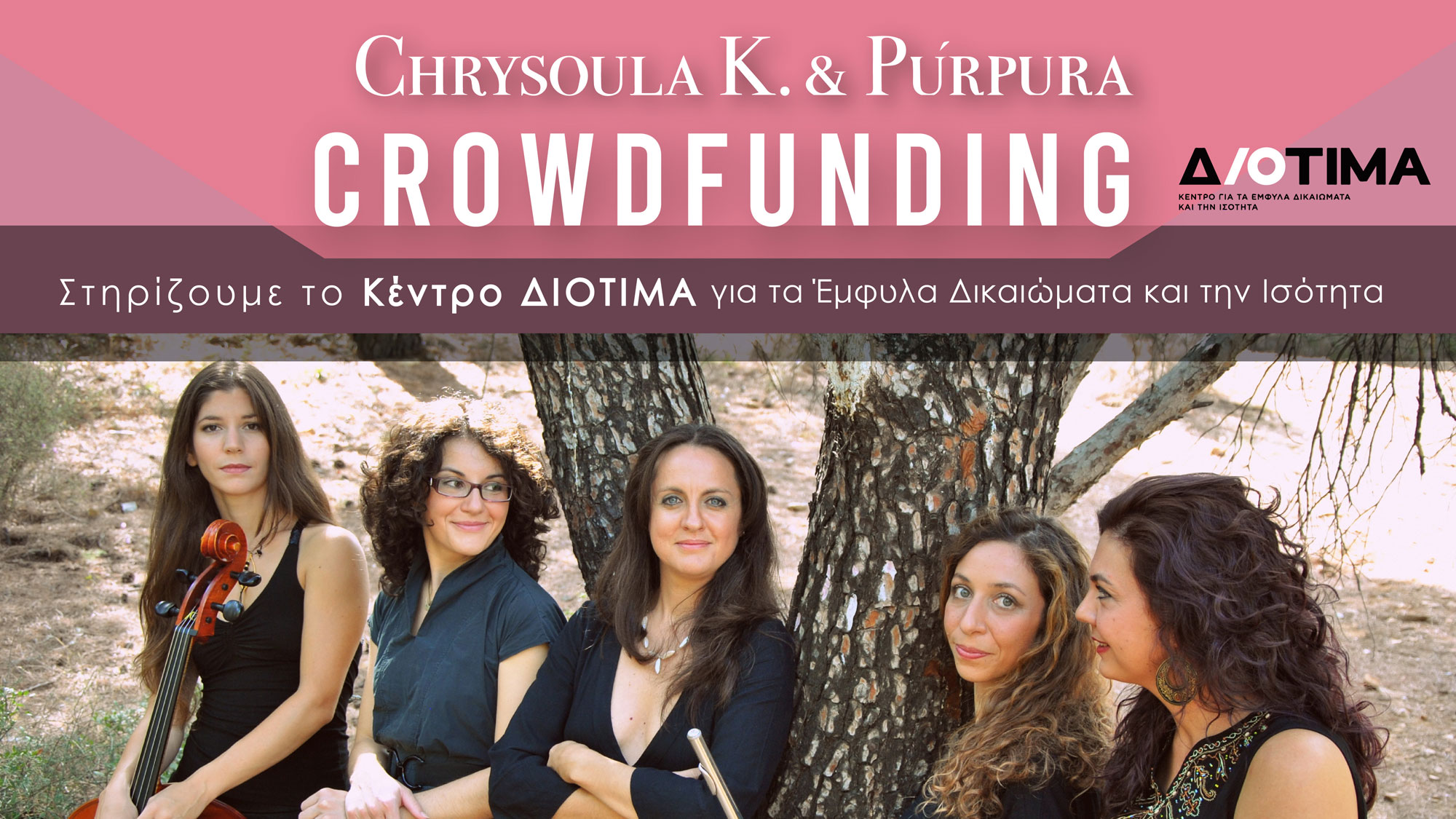 We are a female quintet which started its artistic journey at the end of 2014. Our sound combines elements deriving from classical music and ethnic scene melodies in an original World Music approach.

Through our music we have traveled all over Greece as well as participated in international events abroad such as: 2017 Austria, 2018 Finland, 2018 Australia. We have performed on stage and recorded in the studio with artists such as Noriana, Muzikal Ifade, ThodorisKouelis, Alexandros Kapsokavadis from Greece, Haig Yazdjian from Armenia and Neil Hannah, Donal O’Conor and John Mc Sherry from Ireland.

Why we are doing this?

As musicians and restless people we wish to use our art form as a steppingstone for the life improvement of women who do not have the financial capacity to move legally against their abusers, whoever those may be, regardless of gender or simply because the social system favors the strong who wish to impose their will upon the “weak”.

Due to our growing concern about gender issues, before and even more so during the pandemic we would like to function as an awareness and actual financial support information medium.

In this context, we decided to allocate any profits from the first two months of the circulation of our new album entitled “Lost City”, featuring the song “Coralenia” [ lyrics: Thomas Noutsopoulos, composition: Thomas Noutsopoulos–Dimitris Pantos ] to show in practice our support to the survivors of gender abuse upheld by the Diotima Centre.

into the light of freedom and self–disposition.

Diotima Centre is a women’s non-profit organization specializing in gender-issues and equality. Throughout its 30 year activities, since 1989, Diotima’s vision has been to bring out and deal with gender discrimination, contribution to the formulation and promotion of gender equality policies, defending women’s rights and offering multifaceted support to those in need by providing help to vulnerable and excluded groups suffering from gender violence. Diotima’s major role is to inform and raise awareness upon gender stereotypes and gender-violence/abuse.

For us artists there is no better achievement than making plans that can be realized through you, the supportive audiences that believe in us!

We ask for your support with this endeavor!

We ask you to unite your voices with ours!

Since many voices are always louder than a single one!

Because we believe in solidarity, in supporting each other, in humanity and in beauty!

Because our Power is our Voice!

10 €  – sending you a digital link to download “Coralenia” in excellent sound quality and the HD video.

20 €  – sending you a digital link to download the whole CD in excellent sound quality.

30 €  – sending you two digital CDs, the new one plus our previous one which was released exclusively in Australia.

40 €  – sending you two digital CDs, the new one and the previous one which was released exclusively in Australia &

A digital music- sheet of a song of your choice from our new album signed by the band members as well as by the composers.

50 €  – sending you the two digital CDs mentioned above &

A “Coralenia”set of digital post-cards illustrated by Irini Triantafyllidis with your name on it digitally signed by us too. You will also receive the cards without any digital signatures so you can print and use them as plain post-cards.

Your name written on the credits of the You Tube “Coralenia” video.

An invitation to one of our upcoming live gigs including tickets for two persons.

Michalis Orphanidis for the translation of the lyrics and the Crowd Funding text addressed to our international audiences.

Elena Christakou for “orchestrating” the Social Media and Crowd Funding.

Irini Triantafyllidi for the CD artwork and the creation of the “Coralenia” video thus influencing our whole view point and esthetics in general.

George Kariotis for the recording at Sierra Studios.

Christos Zorbas for the mastering of the album at Sierra Studios.

Each and every one of you for supporting this endeavor!!!