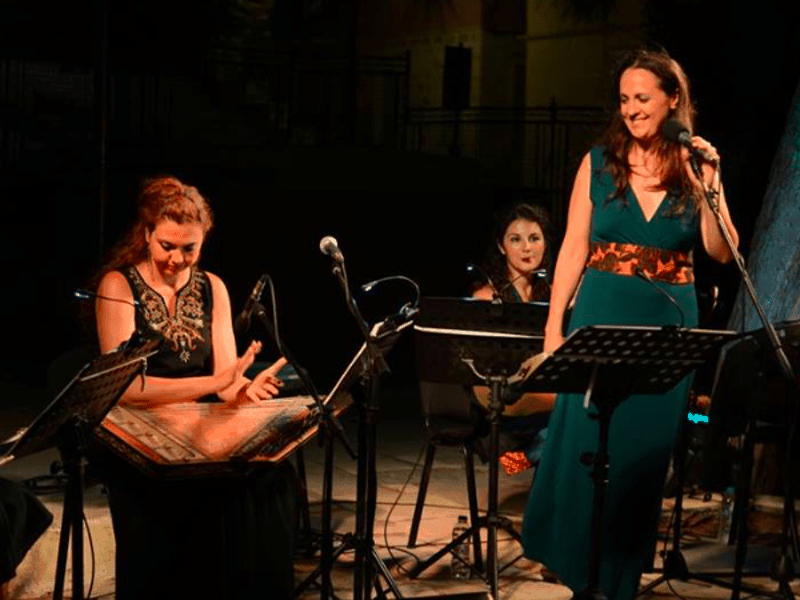 Chrysoula K. & Púrpura is one of the most interesting Greek folk group of its time, as they experiment with songs and tunes of different cultures, including Argentina, Portugal, Armenia and Italy, combining them with the rich Greek tradition. Their classical western forms create a fresh sounding reality, described as nostalgic, vivid, playful and airy.

Influenced both by the East and the West, they aim to be part of the endless dialogue between the four cardinal points of the horizon.

Purpura members include Maria Ploumi on the flute, Sofia Serefoglou on the flute and Elsa Papeli on the cello.

Púrpura took their name after the latin word for “purple”, a colour that symbolises spirituality, mystery and of the members’ nostalgia for ages when people’s differences were not a cause of division and pain.

They carry with them songs from the discography of Chrysoula Kechagioglou, the group leader, but also traditional and composers’ songs from a variety of countries.

The slightly paradoxical choice of instruments – one traditional eastern Mediterranean instruments: lute and two instruments of classical origin: flute and cello, is the means for the exploration of this new musical land that the members of the band are trying to discover.

They are currently Touring Australia-